The most recent expansion of the medical school debuted on June 20, 2018, as the University hosted a grand opening ceremony for its new state-of-the-art clinical skills center.

The Bexar County Court provided key funding for the construction of the new clinic.

Medical students attending the School of Osteopathic Medicine will now be able to gain hands-on experience performing essential primary care procedures on members of the Bexar County community in the newly opened clinic under the supervision of experienced faculty and physicians. .

Patients of the medical student will be able to use the clinic as a free primary care facility and receive services such as cancer screenings, vaccinations, and diagnoses of injuries and illnesses.

Bexar County Court, following a push led by Ward 4 Commissioner Tommy Calvert, allocated $ 1.5 million to build the clinic, which Commissioner Calvert said “will have an impact of $ 1.5 billion [for the Brooks City Base area] over the next 10 years [and will] create a second medical center on the south-east side; benefit to[ing] counties in southern Texas.

The University’s medical school and clinic might not exist without the lobbying efforts of Commissioner Tommy Calvert. When the Texas legislature decided between several separate institutions to formally recognize it as an official medical school, Commissioner Calvert made it his top legislative priority during the 2017 legislative session to lobby Texas lawmakers to obtain official state recognition, vital recognition for the UIW School of Osteopathic Medicine and fourth enclosure by extension.

The Dean of the Faculty of Medicine, Dr Robyn Phillips-Madson, says that “Commissioner Calvert’s support has been invaluable in arguing in the Commissioner’s Court for [the construction of the] interactive learning environment and clinical space. 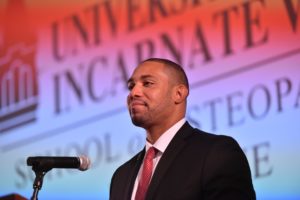 The support of Ward 4 County Commissioner Tommy Calvert for the school and clinic has been “invaluable.”

Bexar County, like so many other Texas counties, suffers from a severe shortage of physicians and qualified medical personnel, with an even greater gap in the retention of native San Antonian medical talent.

The construction of the clinic is a significant step towards addressing this shortfall – 23% of the inaugural class of the School of Osteopathic Medicine are native citizens of Bexar County.

University administrators made it their prerogative to recruit local South Texas students for the program, in the hopes that this new opportunity would be an effective tool to inspire and develop the next generation of San Antonio physicians.