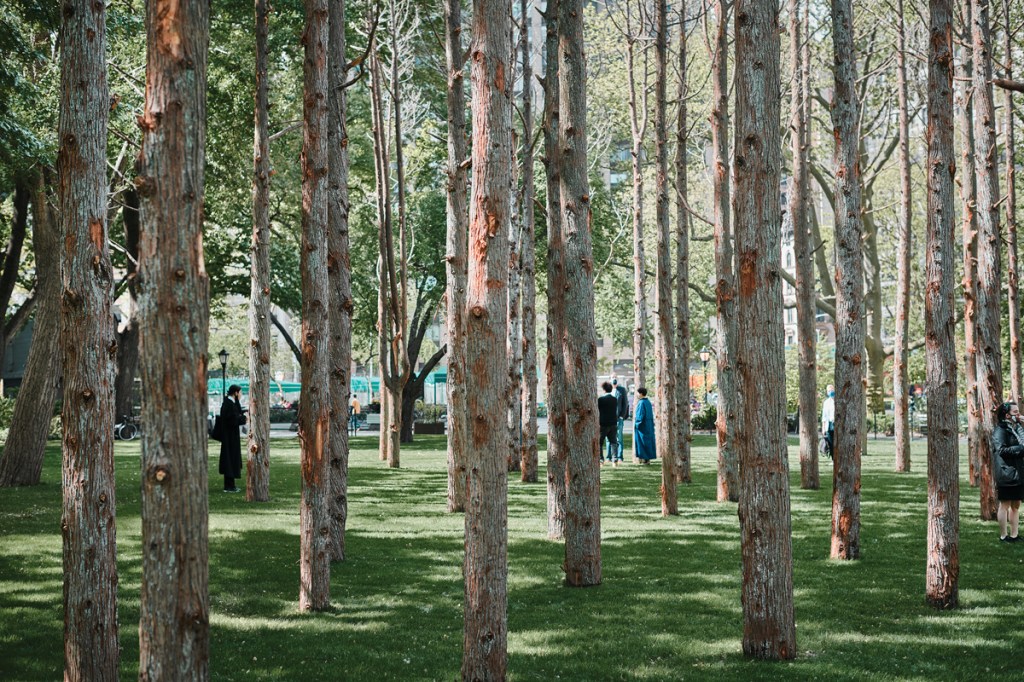 Maya Lin explains how art can lead us to a sustainable future – ARTnews.com

So many of us live in cities, and are so far removed from nature. I grew up in Athens, Ohio, surrounded by woods. Behind our house were three wooded ridges separated by streams; all my childhood was spent playing in these woods and on these hills. I called the one in the middle the “lizard back” because it came out of the creek bed, like a tail. It developed into a long, winding ridge and ended in what to my brother and I looked like the head of a lizard.

My relationship with the natural world was formed while playing in these hills, but I was also influenced over these years by the emergence of environmental movements that shaped the way governments created protections for an air. and cleaner water, and for endangered species. Growing up, I was extremely aware of how the actions of one species, humanity, had such a damaging effect on the environment. These feelings and concerns that I always carry with me, but with climate change threatening the planet and us, it has become an increasingly pressing issue for me.

What is our relationship with nature in the 21st century, with climate change being one of the biggest threats we face and so much of our worldview? And how should we rethink our relationship to this world? In my work, I’m intrigued by the idea of ​​trying to reconnect with the natural world – to maybe get you to pause and listen and take a closer look at what’s around us, things that you don’t. you may not have watched or listened to since. you were a child. My works have been shaped by the reactions I have had to the sites they occupy, trying to explore new ways to change your perception of the site itself and connect with your immediate natural surroundings. .

With Ghost forest in Midtown Manhattan, I bring together a need to make you aware of the horrific threats we face as a result of climate change, and a need to connect in an intimate and powerful way to the simple yet majestic beauty of nature. I wanted to bring you face to face with these mighty and beautiful trees that grow so close to Manhattan – they come from New Jersey – and are quickly disappearing. They form a silent grove that bears witness to the immense and almost incomprehensible disappearance of the global forest, and yet there is a haunting beauty in them. I see them as gentle, silent giants that I ask you to know.

I started my career working on the themes of memory and loss, and throughout my life I have been drawn to these works of memory, while pursuing both my artistic and architectural practices. With Ghost forest I was able to create something that is an environmental sculptural work of art as well as part of one of my more advocacy oriented projects, What is missing?, a memorial dedicated to raising awareness of what we are losing from the natural world that also emphasizes what can be done to help both protect and restore species and habitats as well as reduce emissions from climate change.

Around the world, climate change is killing large swathes of forests. These are called ghost forests, and they are being killed by rising temperatures, deforestation, saltwater flooding as the sea rises, forest fires, and the insects whose populations thrive in these warmer temperatures. ; the trees themselves are more susceptible to beetles due to the excessive stress caused by rising temperatures. In southwest Colorado, where my family and I live in the summer, national forest lands show signs of beetle infestation one season, with the upper needles turning reddish brown, and the next season the entire stand is dead.

Thinking of a sculptural installation for the Madison Square Park Conservancy, I knew I wanted to create something that would be intimately connected with the park itself, the trees, and the state of the earth. Being more used to doing large-scale permanent works, I knew that a different approach had to be taken, that I wanted to create something transient and temporal rather than one that looked more like one of my permanent pieces. This is not a time frame that I know in my outdoor facilities.

Planting trees was an idea that seemed to fit into the project’s temporality. As I mulled over how to approach this project and site, I couldn’t help but gaze at the Ghost Forest just outside my studio in Colorado, which overlooks these National Forest Lands. I felt I needed to bring a ghost forest to the heart of Manhattan and find trees as close to Manhattan as possible.

My team and I located trees in the Pine Barrens of New Jersey: 150 miles from town, an Atlantic cedar stand was dying due to a flood of salt water from a neighboring estuary. Foresters were working with the local landowner to clear this dying grove as part of a forestry practice that will allow tree regeneration, as cedars need open light to repopulate. We are “borrowing” these trees for the 6 month installation – and this grove will continue to decompose and bear witness to the full seasonal cycle of living trees in the park.

I believe awareness is key to getting people to want to take action, but I also believe that climate change is happening so quickly that it is not enough to just wake people up to the issues we are facing. I think it’s important to also focus on what each of us can do to help. Our land use practices are a major cause of emissions and a factor in the loss of species. Reforming our forestry practices, reforming our agricultural and livestock practices, and protecting and restoring our forests, grasslands and wetlands, these nature-based solutions can potentially offset and sequester significant amounts of global emissions (50 to 90 percent ). They would not only help protect the planet’s biodiversity, but also ensure its increase and restoration.

Within the framework of Ghost forest, and in collaboration with the Natural Areas Conservancy, a thousand trees and shrubs will be planted to offset the carbon emissions produced during the realization of the work of art. Throughout the 3 years of planning and installation, we have been able to calculate our carbon footprint. About 5.3 tonnes of carbon have been emitted, and over the next 10 years these thousands of trees will absorb some 60 tonnes of carbon, offsetting more than the carbon output of the work of art.

Ghost forest is the last installation of what I consider my fifth and final memorial, What is missing?, a nonprofit foundation I created to raise awareness about the ongoing sixth mass extinction, focusing attention on species and places that have gone or will most likely become extinct in our lifetimes if we don’t do not act to protect them. An essential part of the foundation’s mission is not only to make you aware of what we are losing, but to emphasize that by protecting and restoring habitats and reforming our land use practices, we can effectively “saving two birds with one tree”, both protecting species and reducing emissions.

Like my other works, What is missing? (and Ghost forest as part of it) is about nature and our relationship with it, focusing on what we lose in the natural world and presenting both specific actions that everyone can take to help as well as to consider new macro ways of seeing a different outcome for us and for our planet. I see the overall concept as an art project based on the science of guerrilla warfare that continues to grow and evolve: I build this memorial for all to see and revise it as I go. What is missing? is a memorial that can exist in many forms and places; Ghost forest is, so far, the most visible manifestation.

Last spring, when Ghost forest opened, marked the smooth launch of our revamped website to What is missing?, whatismissing.org, with a more public launch slated for the fall. As with many of my works, time is truly the setting for this memorial. What is missing? presents an ecological history of the planet: past, present and future. What we are losing or have lost, stories of conservation successes and failures at present, and, finally, greenprint, which presents a macro reflection on plausible future scenarios that will balance our needs with those of the planet.

I believe that art can help us imagine and map sustainable future scenarios and in doing so, give people a way to see and hope for a different future. I think people are overwhelmed by the issues we face and feel helpless. What is missing? shows how the actions of each person can make a difference and how art can sometimes present new ways of approaching the issues we face in a way that makes those issues seem like evolutionary. It can help us see how much of a difference our actions can make.

Part of the website asks visitors to share a personal memory of something they have seen diminish or disappear from the natural world. In doing so, they become a part of this growing collective online memorial, and perhaps reconnect with nature as well. I also invite you to contribute.